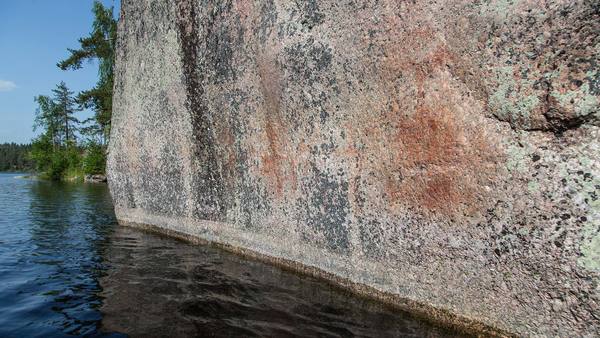 At the head of the Verlankoski rapids is a series of rock paintings. The oldest layers are estimated to be 7000 years old.

At the head of the Verlankoski rapids in the immediate vicinity of the Verla mill is a rare series of prehistoric rock paintings estimated to be 7000 years old. The paintings represent the earliest phase of Finnish rock paintings, predominantly of the Pit-Comb Ceramic culture.

The age of the three distinct layers of paintings may vary greatly in age. Apparently, new paintings were made over the old ones, marked in red ochre on the smooth cliff face. The thin silicon dioxide layer that has crystallised over the paintings has protected them for millennia.

The cliff face rises vertically from the lake, and the paintings occupy an area about 6 metres wide and 1.5 metres high, with clearly discernible paintings of 8 elk, 3 people and an angled line pattern. There are also some worn-out and unrecognisable patterns on the rock face.

The best location to view the rock paintings is from the landing on the other side of the stream, near the museum’s car park.

Your order
If there is an active order you can find it here.